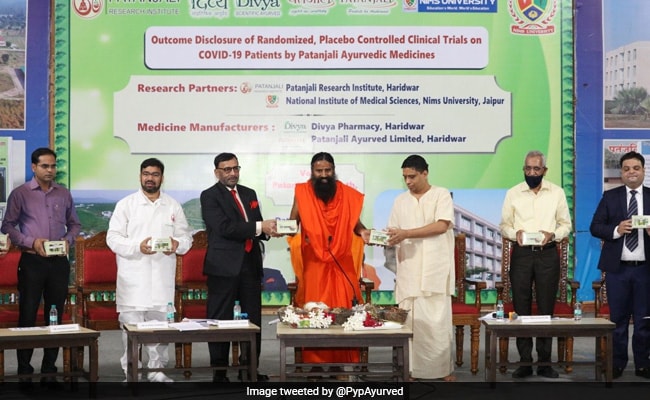 Patanjali yesterday launched a Corona kit with the medicines, “Coronil and Swasari”

Patanjali Ayurved never disclosed that its new medicine kit was for coronavirus when it applied for a license, an official in Uttarakhand said today, indicating more trouble for the drugs claimed by yoga teacher Ramdev to cure the deadly virus. A licensing officer said the herbal products company sought a license for an “immunity booster and a cough and fever cure”.

Patanjali yesterday launched a Corona kit with the medicines, “Coronil and Swasari”, with Ramdev claiming 100 per cent favourable results during trials.

But soon after the launch, the government asked Patanjali to stop advertising the medicines until they were examined. The Ministry of Ayush asked Patanjali for details of the composition of the medicines, the results of its research, the hospitals where the research was conducted, whether the company had a clearance from the Institutional Ethics Committee and whether it had registered for the clinical trials.

The government also asked the licensing authority of the Uttarakhand government to provide copies of the licence and product approval details of the medicines, which were developed at Patanjali’s lab in Hardwar.

“As per Patanjali’s application, we issued them license. They didn’t mention coronavirus, we only approved license for immunity booster, cough and fever. We’ll issue them a notice asking how they got permission to make the kit (for COVID-19),” YS Rawat, Licence Officer at the Uttarakhand Ayurveda Department, was quoted as telling news agency ANI.

Ayush Minister Shripad Naik said this morning it is a “good thing” that Ramdev has given the country a new medicine but it needs proper permission from his Ayush Ministry. Patanjali sent documents related to the medicines only yesterday to the ministry, he confirmed.