A post circulating on social media claimed that Bharat Biotech’s Vice President DR VK Srinivas is the first person in India to be administered COVAXIN.

Bharat Biotech on Friday rubbished social media posts doing the rounds claiming their Vice President DR VK Srinivas is the first person in India to be administered COVAXIN, the vaccine against the novel coronavirus developed by the firm.

A post doing the rounds on social media on Friday claimed that the Vice President of Bharat Biotech, Dr VK Srinivas is the first person in India to take the COVAXIN vaccine. The post intended to show that the employees of the firm have full faith in the vaccine developed by them.

The Indian Council for Medical Research (ICMR) has set a deadline of August 15, 2020 for COVAXIN, India’s indigenous COVID-19 vaccine, to be made available to the public. ICMR had partnered with Bharat Biotech International Limited (BBIL) to develop the vaccine derived from a strain of SARS-CoV-2 isolated by ICMR-National Institute of Virology, Pune. The clinical trials are expected to begin only by July 7. 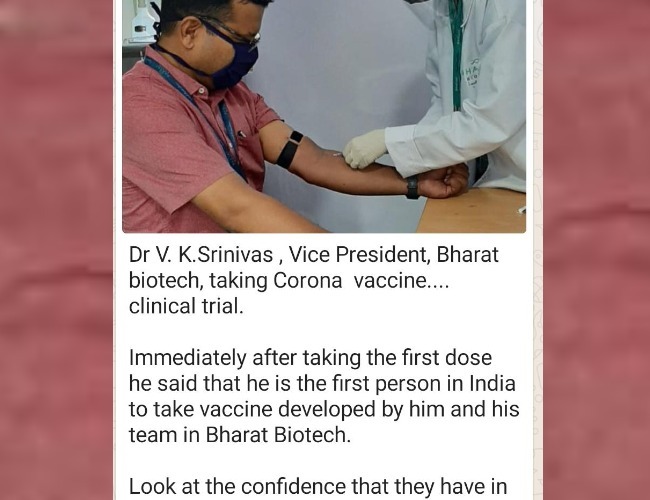 However social media posts doing the rounds read, “Dr V. K.Srinivas, Vice President, Bharat biotech, taking a clinical trial of Corona vaccine.He said that he is the first person in India to take vaccine developed by him & his team. Look at the confidence that they have in their product.”

The post also has a photo attached showing a nurse and a man. The picture shows the nurse collecting blood samples from a man but has been wrongfully attributed as the nurse administering the vaccine intravenously.

In a statement to the media, Bharat Biotech said, “This is not true. This image is routine procedural blood drawn for testing all our production staff. You can see the black band on his arm. A classic case of fake news circulation in WhatsApp.”

Another firm Zydus Cadila has also come out with a vaccine ‘ZyCoV-D’ which has received permission to initiate phase I and II of human clinical trials in India.