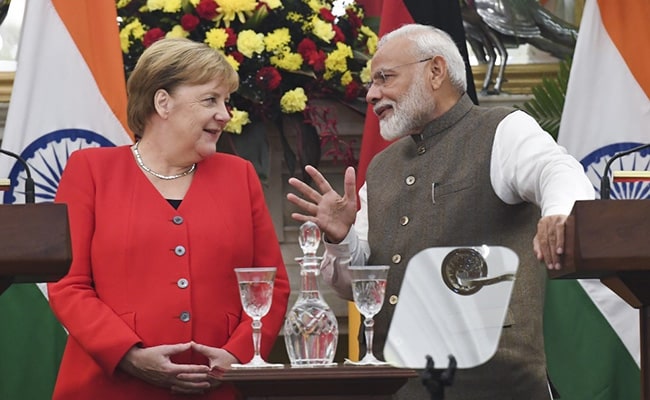 Addressing PM Modi as “Narendra”, the German Chancellor said she had “fond memories” of their meeting at the Indo-German intergovernmental consultations last year. “I wish you all the very best in the future – particularly, in these unusual times, health, happiness and fulfilment,” she wrote in her message that was shared by PMO on its twitter handle.

“Together over the past few years we have succeeded in consolidating even further the traditionally good relations between Indian and Germany,” the German Chancellor said.

Chancellor Angela Merkel wrote to PM @narendramodi, conveying greetings to him on his birthday. pic.twitter.com/2EKOIyVJrY

Russian President Vladimir Putin, in his birthday wishes, said that he “values the friendly relations” developed with PM Modi and credited the prime minister for moving India along the path of socio-economic, scientific and technical development.

“I value the kind, friendly relations that have developed between us. I look forward to continuing constructive dialogue with you and work closely together on topical issues of the bilateral and international agenda. From the bottom of my heart, I wish you good health, happiness, well-being and every success,” read Russian President Putin’s message for PM Modi.

In her birthday wishes to the Prime Minister, Finland’s Prime Minister Sanna Marin said there is much potential to deepen even further the relations between the two countries.

“We have the opportunity now to turn the good spirits and broad array of deliverables from it into action. To this end, Finland supports concrete cooperation between India and the European Union in many sectors, such as sustainable development, including the circular economy, free trade and human rights,” Sanna Marin said in a letter to PM Modi.

Nepal Prime Minister KP Sharma Oli has also extended greetings to Prime Minister Narendra Modi on his 70th birthday and said that the two leaders will continue to work closely together to further strengthen relations between India and Nepal.

“Warm greetings to Prime Minister Shri @narendramodi ji on the auspicious occasion of your birthday. I wish you good health and happiness. We will continue working closely together to further strengthen relations between our two countries,” Mr Oli tweeted.

PM Modi’s party the Bharatiya Janata Party (BJP), has organised various events like distribution of ration amongst the needy, organising blood donation camps and eye-check up camps to celebrate his birthday.