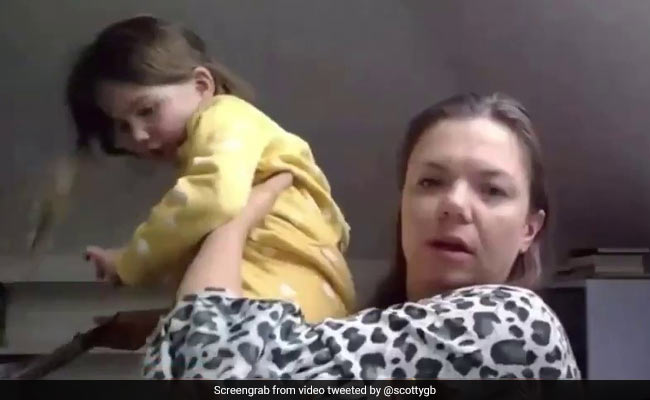 A live interview on BBC News between Dr Clare Wenham and anchor Christian Fraser was hilariously derailed when Dr Wenham’s daughter interrupted their discussion. In a moment sure to resonate with parents across the world who are working from home, little Scarlett interrupted her mother, demanding to know who she was speaking to.

According to the Independent, Dr Clare Wenham, a global health policy expert from the London School of Economics, had been speaking to BBC anchor Christian Fraser about coronavirus lockdowns when her young daughter appeared in the background.

Scarlett was first seen trying to decide where to place a unicorn painting as her mother carried on the discussion, prompting Mr Fraser to ask her name.

“Scarlett,” he said, after getting to know her name. “I think it looks better on the lower shelf, and it’s a lovely unicorn.”

The child refused to let the discussion go on, throwing herself into the limelight hilariously. “What’s his name? What’s his name, Mummy?” she demanded to know, before addressing Christian with: “Christian I’m just deciding where mummy wants it the to go,” referring to the unicorn painting.
“Mummy, where do you want it to go?”

A video of the adorable interruption has left millions of people in splits. Watch it below:

Since being posted on Twitter, the interview, which took place on Wednesday, has collected over 2.7 million views and hundreds of amused comments.

This is great and I love it.

But the interviewee should not be apologizing! Christan started it! He popped that can of worms right open! He ushered Scarlett into the discussion! He’s got a two-person panel going now, he can deal with it! ????

Another parent totally nailing it during lock down, well done that mum & wonderful Scarlet! I was on an ‘important’ call recently when my daughter came to ask if huskeys having blue eyes help them when working in the snow???? started a wonderful conversation with all on the call.

In 2017, Professor Robert Kelly was live on BBC World News when his four-year-old daughter walked in happily to gatecrash his interview followed by his toddler son. A video of the moment went massively viral and entertained millions across the world. It even resulted in the children getting their own cartoon show.

What do you think? Let us know using the comments section.