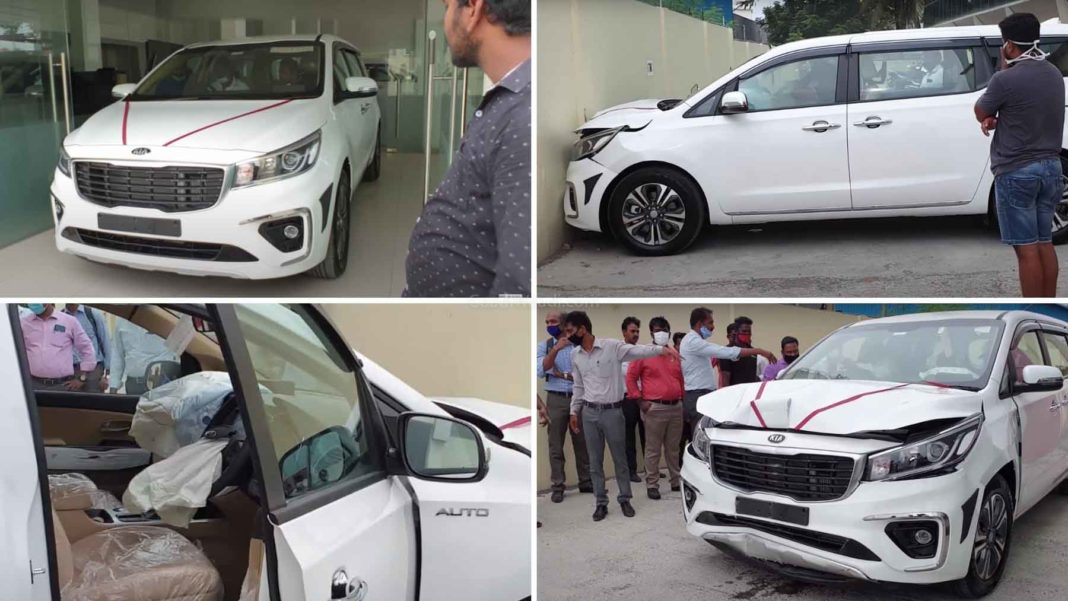 The car buying experience is a very special moment for a lot of us, and its certainly a fact that owners are more careful with their newer vehicles as compared to their older cars, let alone a brand new car waiting at the dealership to be picked up by you. Unfortunately, the very special moment of a new car being delivered turned into a nightmare for this new Kia Carnival owner.

At the beginning of the video, a dealership personnel seems to be informing the new and excited owner about all the controls and the switches of the new MPV. A person can also be seen clicking a picture of the new car, which they believe will be a souvenir of this moment, and will be cherished by the owner later in his life.

However, the situation turns ugly in just a matter of seconds. It seems like the owner got too excited and put his foot down on the accelerator instead of gradually pushing it to move the Carnival. The result? The immaculate new Clear White Kia Carnival goes and crashes into a concrete wall. The impact was so severe, that even the front airbags were deployed.

Luckily, no one was hurt during this episode. Well, at least physically. The person who was spotted clicking the picture of the new Carnival earlier in the video, seems to have gotten out of the way of the massive 2.2 tonne MPV just in time. If you look closely, you can also see that a dealership employee was still talking to the driver of the car, and the driver’s side door was open as the car started accelerating.

In a similar incident reported earlier this week, a brand new Volkswagen Polo was being delivered, but the owner’s first drive in his new car turned out to be worse than he could ever have imagined. The driver possibly lost control of the hatchback, which then went on to hit a metal gate before being tossed into the air and ending up upside down.