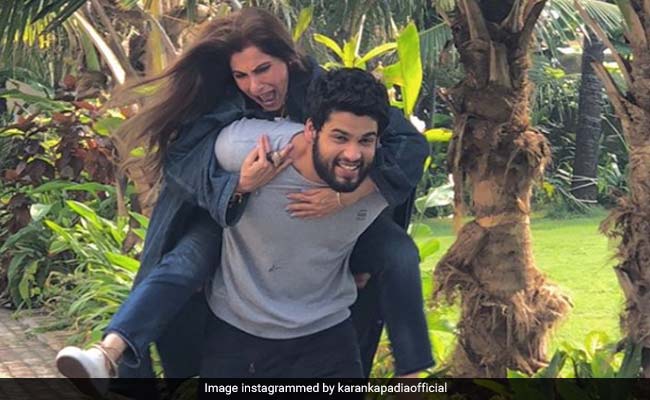 Dimple Kapadia turned 63-years-old on Monday and is still evergreen. On her birthday, her nephew Karan Kapadia shared a super cute picture on his Instagram profile, in which he can be seen giving a piggyback ride to his aunt and her expressions are simply priceless. Karan, who made his Bollywood debut with Blank, just added a heart emoticon to his caption and wrote: “Happy Birthday.” We spotted several comments like “Happy Birthday to most gorgeous actress,” supercool pic” and “so cute” on Karan’s post. A fan made a reference to Dimple Kapadia’s debut film Bobby and wrote: “Wishing Bobby girl a wonderful, healthy and a happy year ahead.” Karan Kapadia is Dimple Kapadia’s nephew. He was born to the late actress Simple Kapadia, who was also a costume designer.

Dimple Kapadia frequently makes appearances on her nephew’s Instagram profile. Check out some of the posts here:

Dimple Kapadia is best-known for her performances in Bollywood films such as Bobby, Saagar, Rudaali and Gardish among many others. Christopher Nolan’s upcoming film Tenet will mark Dimple Kapadia’s debut in Hollywood.

Dimple Kapadia’s daughter Twinkle Khanna is a former actress and a best-selling author. She is also a film producer and an interior decorator. Dimple’s son-in-law Akshay Kumar is a Bollywood A-lister. Dimple Kapadia was briefly married to superstar Rajesh Khanna, who died in 2012.