Ayushmann Khurrana shared a heartwarming picture to wish his mommy on her birthday.

New Delhi: Bollywood actor Ayushmann Khurrana, who is known for his power-packed performances in films, shared a cute picture with his mother on social media. The ‘Dream Girl’ actor posted the photo to wish his mommy dearest on her birthday. Ayushmann and his brother Aparshakti Khurrana can be seen showering their mum with kisses in the photo.

The adorable photo will definitely make you say aww. Ayushmann didn’t post a long caption but simply wrote, “Happy birthday Maa.” After all, such pictures don’t need any cheesy captions, isn’t it? Check it out! 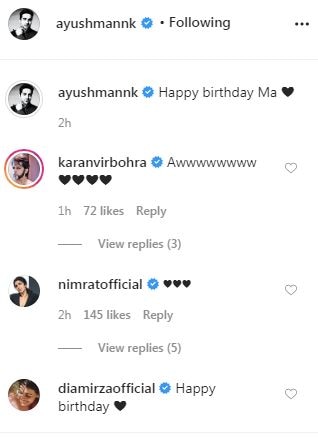 Aparshakti Khurrana also shared the same picture on Instagram to wish their mother.

Ayushmann and Aparshakti are spending quality time with their parents in Chandigarh. The ‘Stree’ actor recently shared a video with his brother Ayushmann in which they were seen playing everyone’s favourite childhood game ‘Aa Milo’ but with a twist.

On the professional front, Ayushmann Khurrana was last seen in ‘Gulabo Sitabo’. The film co-starring Amitabh Bachchan premiered directly on Amazon Prime on June 12. The comedy drama, directed by Shoojit Sircar, received good reviews from the critics and fans.

Talking about Aparshakti, he will romance Pranutan Bahl in the film ‘Helmet’.

We wish Ayushmann and Aparshakti’s mother a very happy birthday.