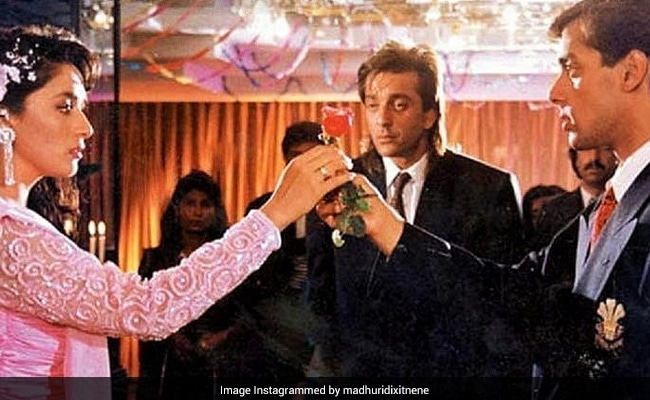 As Madhuri Dixit’s 1991 film Saajan clocked 29 years on Sunday, the actress shared a memory from the film by posting a throwback picture on her Instagram profile. The aforementioned picture features Madhuri Dixit along with her Saajan co-stars Sanjay Dutt and Salman Khan. Adding the hashtag #29YearsOfSaajan, the actress shared the reasons why she said yes to the project. “After reading the script of this film, I instantly decided to be a part of it. The story was romantic, the dialogues were poetic and the music was brilliant,” wrote the actress in her post. In the film, Sanjay Dutt played an orphan who is befriended by wealthy Salman Khan during his childhood. As they grow up, Sanjay Dutt emerges as a popular poet under the name Sagar, while Madhuri Dixit played the role of one of his fans. Madhuri’s liking for the poet and Salman coming in the frame led to a love triangle.

Madhuri Dixit will soon be making her debut in the digital world with Netflix’s upcoming series, which will be produced by Karan Johar. The actress has previously collaborated with Netflix for a Marathi drama titled 15th August, which was her debut project as a producer.